Masaki Kobayashi’s Harakiri belongs to the jidaigeki genre (period piece). It follows the period shortly after the battle at Sekigahara and the establishemnt of the Tokugawa shogunate (1630). The film begins with a short exposition by the official of House Iyi, who talks about the everyday life of the samurai warlord. It is a perspective of a person in power, whose status is in sharp contrast to the one of rōnin, a samurai without a lord. We see the samurai armor, which belonged to the one of the ancestors of House Iyi, surrounded by a fog similar to the one we can see in performances of Wagner’s operas. The armor represents tradition, the samurai code of honor, bushido. An impoverished rōnin comes to the House Iyi to ask for permission to commit seppuku in their courtyard. The house of his lord has fallen and he wants to end his life honourably.

He s told that acts of this kind have become widespread since one rōnin, after asking for a place to commit seppuku, became a retainer in one of the houses, causing the admiration of the samurai. The others followed him, with insincere intentions and got a few coins so the samurai could get rid of them. It is important to note, as Daniel Botsman writes, that the rōnin were the destabilizing element in the time of the shogunate’s rule and were often the source of public disturbances. Once, a group of rōnin tried to overthrow Bakufu. They were not just vagabonds and beggars who were imprisoned in the West during the time of “the Great Confinement”, as Michel Foucault understands it. The rōnin were trained warriors, a violent element dangerous to the established order.

Impoverished rōnin Motome Chijiwa comes to the doorstep of House Iyi without the intention to actually perform it. House Iyi decides to make a precedent so that dishonourable and extortionate practice stops. Motome’s wish is accepted, he is absolutely horrified, and the ritual of seppuku is arranged in the courtyard. He is forced to disembowel himself with a bamboo sword, since he did not have a steel sword. He stabs the sword in his stomach, manages to penetrate his skin and thrust the sword into his gut. His face shows horrific pain and his head is cut off by his second. Seppuku, which Motome is forced to perform, is the example of the functioning of sovereign power as Foucault understands it. It is the power that lets one live or exiles him into death, in other words, it is power over life.

The telos of the punishment is the prevention of similar acts. Foucault believed that power is productive, it makes things happen. In this case, the image of honor of House Iyi is strenghtened, as well as the projection of the image of horror toward others who could try the same thing Motome did. Daniel Botsman writes: “By far the best-known example of a status-specific punishment, however, is the notorious seppuku, or “suicide by disembowelment” for warrior men. In spite of its name and repuation, when practiced as an offical Tokugawa punishment, this was, in fact, little more than a ritualized form of beheading, involving neither genuine suicide nor actual disembowelment; once the condemned warrior had readied himself, he simply reached toward a symbolic wooden sword to signal the executioner to proceed.” Despite the tradition of the execution by decapitation, Motome is not only forced to disembowel himself, he has to do it with a bamboo sword. Wooden sword which served a symbolic function became an actual means to execute the punishment. 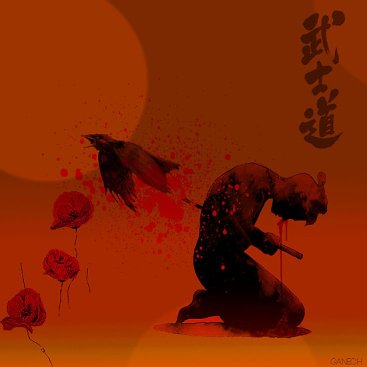 Motome’s father-in-law Hanshiro (Tatsuya Nakadai) comes to the doorstep of House Iyi with the same request. In the palace courtyard he speaks to the gathered samurai about the fall of his lord’s house, as well as destitution of his family, almost in a Faulknerian manner. He speaks of son-in-law’s motives to come to House Iyi and his Motome’s son’s illness which put his life in danger. The film has a fractured narrative, with frequent retrospections and its fabric gradually gains a clearer shape as time progresses. Black and white photography is paired with brilliant use of lighting, of light and shadow. When they find out about Motome’s death, Hanshiro’s and Motome’s wife backs are illuminated, as in prayer, while they are surrounded by darkness. Appalled by the conduct of House Iyi, Hanshiro decides to ask for their remorse. Since he does not get it, the film draws to a close with an aestheticized revenge.

After all, this thing we call samurai honor is ultimately nothing but a façade.

The main tension, or antagonism, is the one between honor as illusion (façade) which conceals socio-economic realities and honor as a legitimation discourse which sustains the order. It is not hard to draw a comparison between the ideology of the shogunate which produces an impression of its benevolence and all the “fine” layers of exclusion which function beneath. Bushido is, speaking in a Nietzschean manner, a ruse which serves the warrior elite to project “moral superiority” and secure their social status. Hanshiro is executed with guns, which foreshadows “the taming of the samurai” which happened in the Meiji era. “The Great Peace” of Tokugawa means that the age of the samurai as actual warriors is at its end and they adapt to the emerging modernity to secure their positions as the rulling elite. The Meiji revolution showed that it could not last indefinitely.

The main counselor of House Iyi orders the defeated samurai to perform seppuku and proclaims that those who died, died of illness. House Iyi gets praises and enfirms its status through lies (illusion): “The house of Iyi has no retainers who could be felled or wounded by some half-starved rōnin”. They tell the other houses that a rōnin performed seppuku in their courtyard, forgetting to tell the truth that the measures to include the excluded and desperate are nonexistent. In the same manner in which Hanshiro sees the samurai honor as a façade, the film ends with the reestablishment of illusion, a façade according to which all the historical and contemporary societies function. Harakiri shows a tragic era in which Hanshiro’s poetic remark that our lives are castles built on foundations of sand, and one strong wind tears them down, holds truth.

Blog by a poet, essayist and translator. Political scientist by vocation. View all posts by Vigour of Film Lines