Satoshi Kon’s wonderful anime depicts the Christmas Eve of three homeless bums (self-proclaimed) who listen to a public sermon and watch a play celebrating the birth of Christ, so they can eat afterwards. One of them, Gin, says: “Joy to the world, food has come”. Soon, they find a baby in the trash, and the transvestite Miyuki who longs for a baby, although he is a man, says they will take her and call her Kiyoko, after kiyoi (きよい), “pure”, “on this purest of nights”. He recites a haiku: “A little baby/powdery snow on its cheeks/on this holy night“. Understood in the context of a Christmas Eve, and the celebration of Christ’s birth which follows, it seems as if the three homeless bums are a comic inversions of three Kings who visited Jesus in his cradle. They look after the young child they call Kiyoko, having nothing to give her but their care and protection. It seems as if this child is a symbol for everything Christmas represents around the world, in a secular way, a time when people are brought together – it is a time of union, or as it is the case in this film – reunions.

Kon is a director who often portrays dark aspects of the psyche, most notably in his Perfect Blue and this film is no exception, although a comic and jubilant celebration of life prevails. The three homeless heroes of our story end up at an upper-class party and one of the attendants is shot; a homeless teenager Hana is taken, along with the child Kiyoko, by the shooter, but ends up talking to his wife who speaks only Spanish. At this moment, we learn about Hana’s past – she stabbed her father in anger and after that she is too ashamed and afraid to come home. In a dream which is characteristic for Kon’s films, the stabbing of her father is recreated, but her mother and father are transformed into Miyuki and Gin. She feels that the reunion with her father is impossible, and when she calls him, she starts crying unable to talk – he realizes that she is on the phone and asks how she feels, worried about her. Gin is a middle-aged man who lies that his daughter and wife passed away, but in fact he was gambling and drinking so his wife left him. In a particularly humorous moment, when he meets an old homeless man, the man asks only one thing from him – booze.

When the old man is lies in an improvised homeless shelter he says that he has always dreamed of dying drunk in a nice house. He says that he is half-way there. He passes out, and pans on the fence stop moving, symbolically conveying his departure. Gin believes that he is dead, but soon we realize that he passed out because he is drunk. Miyuki, a transvestite who is straightforward but caring, has a small reunion with his mother – we learn that he was singing in her bar, but beat one man who offended him – so he ran away incapable to face his mother again. In this film, we encounter a comic band of characters who have done wrong to others in their lives, but their devotion to each other and those they left behind is heart-warming. Several times in the film, the wings of an angel grow out of child’s back and a young homeless girl is wearing a costume of the angel. This Christian symbolism is important since it further emphasizes the angelic nature of the child gone missing and the selfless homeless trio. 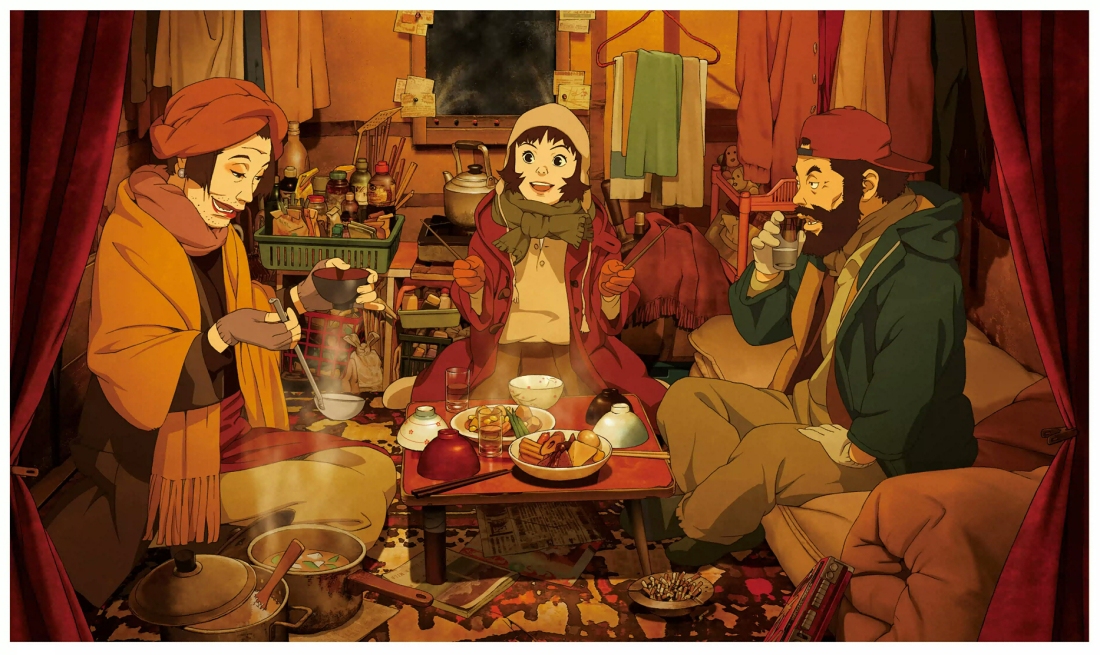 Tokyo Godfathers aims to show us that a path to redemption is an open possibility, and the three homeless heroes of this story accomplish this by reunion with their loved ones – and making the reunion of others possible. When Miyuki is wounded, Gin pays for the costs of her treatment with the money he was saving for his daughter and he realizes that she works as a nurse there. Their reunion is one of the most touching moments in the film, and as she recounts her life to him, it is visible that their bond is still there. Miyuki tells her the truth about her father’s misdeeds, but later says to Hana that his daughter will forgive him. There is a search for the child, Kiyoko, and when Miyuki and Hana find its supposed mother, we find out that she abducted the child from the hospital, but now wants to commit suicide. We learn that she lost her baby before she was born and wanted to replace it with another one. After their fall from a building, which they survive, Miyuki takes the child to its real mother, who decides to make the three homeless heroes its godfathers.

It seems that the child, called Kiyoko, represents a secular image of infant Christ, the child which brings people together through acts of love and compassion. Miyuki calls the child “a blessing” several times, and for many characters in this film, it is. Without it, reunions would not have happened, but the dedication and care these characters show for a child they found that very evening is the true reason why they find their own happiness. Hana finally meets her father who arrives to the hospital on duty; we do not witness their reunion, but we know that it happened. Now this simple story is complete, abundant in hardships, but also full of joy and comic relief. The three Homeless Kings, although possessing nothing but their dedication, brought joy to a family and found their own peace in reunion with their families. Rarely can one find a film which portrays the spirit of Christmas with such warmth. The characters portrayed are flawed, foolish and overly direct and as such they show us what love for fellow human beings truly is: committing acts which bring people together – those who were separated or torn apart – in each other’s arms again.

If you enjoy this type of film criticism, help us create more material. As a gesture of support you can become a patron and participate in the creation of a thorough online repository for art and film lovers. Thank you!